One of the most appealing aspects of sitting down to play a video game is the roller coaster of highs and lows a player can experience without moving from the couch (RIP Kinect games). Maybe your character dies a thousand times before finally finishing a level, or you go through the emotional turmoil of a deep and engaging plot. Even going through the learning curve of a first-person shooter until you can finally hold your own can feel like a journey of sorts. Most people probably don’t lump the yearly series of sports games into this type of experience, but FIFA 17 absolutely delivered with new feature The Journey, which has been continued into the 2018 version as well.

If you’re like me, when you buy the newest installment of FIFA, you probably think you are just buying the next video game in one of the classic sports series that comes out every single year. Let’s be honest, most of us just want to play with the newest players and have the fanciest toys. When I first got FIFA 17, I definitely wasn’t ready for the new Journey mode and the romanticized campaign-style play that came with it. 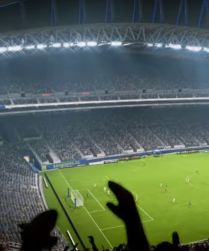 FIFA 17 and 18 of course have all the normal bells and whistles of the series, with slightly altered play physics and new stadia included. I play as my beloved Seattle Sounders FC in the beautifully rendered CenturyLink Field in Downtown Seattle; the crowd noise, the atmosphere, the commentators, and the rendering is all getting so much better year after year, and is pretty amazing to be honest. Then you add in delightful little tidbits like actual chants from individual teams’ supporters, and silly but joyful goal celebrations, and it all just comes together to a super fun experience. I grew up playing FIFA with my college roommates constantly (a while ago now!), so the fact that the franchise is still iterating and bringing small delights like this is pretty impressive.

As with all serial games, the developers have to constantly improve and innovate, and so this time in addition to the tinkering of the past, they’ve added The Journey. FIFA Ultimate Team and Career Mode of course are now standards. Ultimate Team is the card sorting and dealing type game mode that’s great for the data loving among us. The common Career Mode starts you as a player at your favorite team and eventually you get trials at other teams and expand your career through training.

The Journey takes that to an entirely new and amazing level, it honestly feels like Career Mode all grown up to everything the creators of the game always wanted it to be from the beginning. I didn’t think I would get so sucked in, but my roommate and I sat and watched the beginning of The Journey for 30 minutes and kept remarking to each other how it felt like we were starting a campaign of a AAA title game. 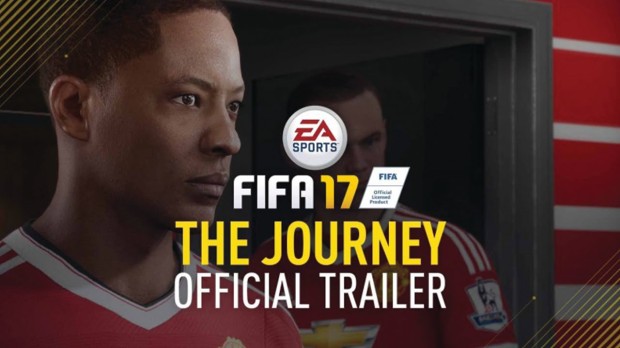 Don’t get me wrong, the graphics and face rendering could use a bit of work, but all things considered, the writing is pretty engaging and gripping. As a player, you grow up as a young boy in an interracial family in England, and you pick your favorite Premier League team – unfortunately for now it is limited to Premier League, but just imagine actually playing this with your favorite team growing up! Your family has a Heritage enriched with football, including your now estranged father. Your loving, always-present grandfather and attentive mother have guided you through the academy and then finally to an exit trial – one’s last chance before missing out on the professional football career.  Even just that amount of detail is so much more than the creatives behind the game needed to include for a passable mode.

Eventually you earn yourself a contract at your first Premier League club. The embrace from ‘my’ parent and grandparent when I found out my best friend made the same Club honestly brought me legitimate delight. I didn’t even know I even wanted this type of experience from FIFA, but the game absolutely nails it. All I can think is that there is some damn good user and market research on the back end of these decisions, and otherwise, mad props to the FIFA team for coming up with an innovative way to bring about a new delight to one of these serial sports games that is so incredibly popular around the world.

There is some history of this type of feature of course. I believe the Madden series did this a couple of years ago with a similar type career mode where you have a dorm room, control your social media, and you can through training. In the FIFA version at least, every decision you make can lead to you being seen as a fiery, cool, or balanced player both on and off the field. The decisions in press briefings and what not make the coach more or less likely to play you in the starting lineup. But the trade-off is more Twitter followers, and the allure of a lucrative ad contract. If this all sounds like boring procedure, I was surprised how much the graphics and pacing of these interactions actually kept me engaged. Of course, there are also actual games mixed in all the time too. You constantly fight for a starting position while also keeping track of your buddy.

There is also the intriguing connection between FIFA Ultimate Team and The Journey, which may just create more of a cross interest between the two modes. Players seem to be able to gather rewards in Ultimate Team through The Journey.

“We don’t need the two of you looking like a couple boy band rejects, there’s only ‘one direction’ to go and that’s that way to the training room.”

This is one example of a hilarious quote from the coach when your character signs with his new team and shows up for training. Small moments like this went a long way to break up the expected interactions, especially because they were so unexpected in this type of game.  In addition to progressing through the game with your mates, the estranged father angle is also kept up throughout the story, and is done in a very nice way with a soft touch. The small ups and downs through the story and through your growing career are well done and touching, guided by a surprisingly good score of music, and the family relationship stays important the whole time as well.

ON TOUR & IN SEASON 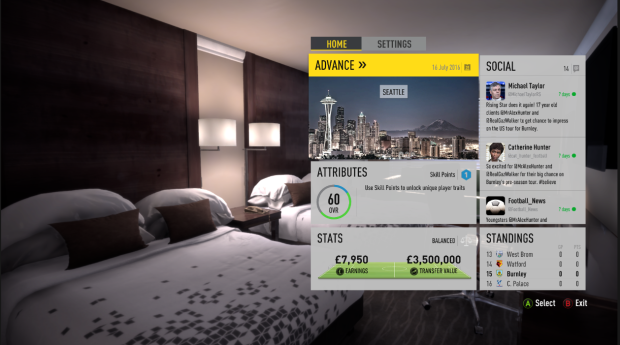 FIFA 17, The Journey takes us to Seattle, Washington

Oh my goodness, I couldn’t express enough absolute delight when I saw the first place my new team took me on my American tour was Seattle, my actual home town! It was a cool moment that cemented my excitement for continuing with the mode.  Shortly after that, there becomes a competition between my character and his best friend for playing time, and shit got real from there.

Competition between friends heats up after the trip abroad in FIFA 17, The Journey

As far as the timing throughout the season goes, it’s just long enough to feel like a slog in the middle of the season but with enough incentives to keep you trying through all the games. The incentive to get sponsorships when you achieve a certain number of social media followers is a fun little way to keep the player caring about the press conference questions and wanting to score goals or get assists. There is still so much potential for future interactions and customization, but I’ve loved the strides that this first instance of The Journey already made. 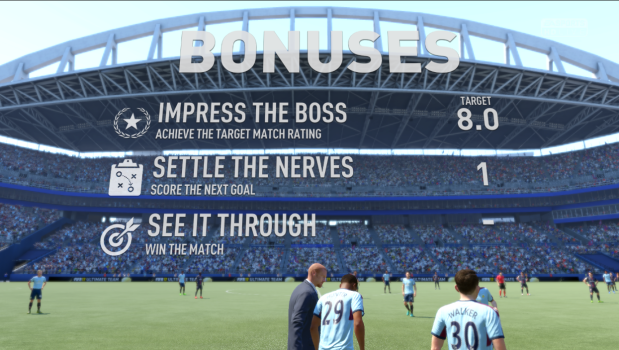 Some of the bonuses available in FIFA 17, The Journey that keep a player engaged through individual games 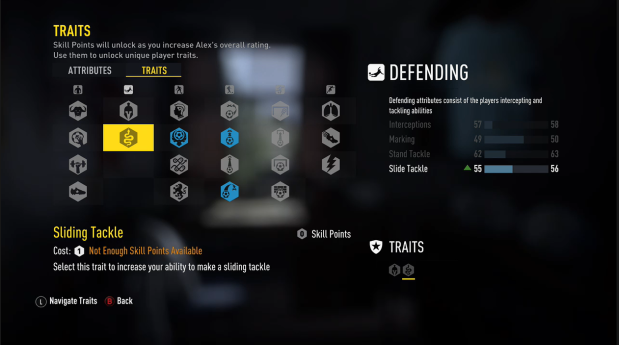 I had a moment while watching the team celebration after the FA cup final where I found myself really wondering at this point if the experience would continue, or if I’d even want that from the game. Would I want to go out on top or actually potentially play through a whole career at this point? I could even imagine the main player’s career ending with an epilogue at their own son’s or daughter’s youth soccer final – which would be a great homage to the beginning of The Journey. The point is that the engaging storyline of The Journey actually made me think of these possibilities, which I think is a pretty good measure of success.

Without giving away too much of the story, I should also note that FIFA does pull some sentimental heart strings near the end of The Journey in 2017 related to the estranged father figure, and ultimately, The Journey ends with a beginning. The main character Alex is invited to the English National team, a long relationship arc between the player’s Grandpa and the agent is finished off nicely, and Alex has found a more genuine friend in Danny Williams.

Overall, FIFA The Journey made me feel something other than just the adrenaline of victory or the agony of defeat during actual games. Of course I did feel that real, true defeat and sadness when we lost out on the title race and the absolute joy at every goal I set up or scored.  But the added story arc of chasing my childhood friend – who turned into a total jerkface – through the league, and eventually crushing him in the FA cup final 3-0 made those goals and assists so so much sweeter. And feeling the pride of starting for a childhood favorite team for the first time, even if it was a forced choice, was pretty exhilarating.

I look forward to more of this type of story-telling and innovation from the seasoned veterans of the yearly sports franchises.

GAME DESIGN WORTH ADVOCATING FOR

Recommended for fans of this genre? Yes!  At the very least, you have some extra button presses between season matches, and who knows, maybe you’ll find yourself getting sucked into the story a little bit here and there.  At best, you’ll discover a way to feel more connected to the bits outside the lines.

Recommended for non-fans of this genre? Well, hmm.  I feel like you probably have to enjoy trying new things at the very least, and it might be best to have some interest in sports games.  But honestly, the story was gripping enough that it might be a cool introduction to the genre if you’ve never given it a real shot before.  And you’re playing against AI opponents, so there’s no trash talking, other than from, you know, AI.

There’s room for improvement, no doubt, in almost every facet of this new foray into compelling story arcs in a sports franchise, but I’m just damn happy someone is giving is a real try for the soccer/football/futbol fans and supporters out there.  Considering that this is such an early version of this type of mode, it was impressively built out, and I’m encouraged to see it continue in FIFA 18 as well.

← Festival Powers That Be: Advocacy and Vibrancy to be Found at a Festival Near You