Having missed the boat on Playstation titles of yesteryear like Spyro, Jak and Daxter, Sly Cooper, and of course Ratchet and Clank, I decided to throw down the fairly manageable $40 for the new reboot on PS4. Really, what hooked me was the early Dreamworks-quality animation, the abundant particle effects, and the promise of a quick play-through. While cumulative hit-or-miss experience, it’s for the most part what I expected. R&C excels in its variety of weapons, enemy types, impressive visual flair, and arguably even in its silly, self-aware parody-esque narrative. It falls short in the movement mechanics, has some incredibly dry and slow-paced Clank missions thrown in, and has some clunky weapon switching mechanics and general control issues.

Straight out the gate, this game is definitively eye-candy. I mean, look at this environment. Packed with detail, texture, vibrancy; it feels like the first title to approach playable Pixar proportions. 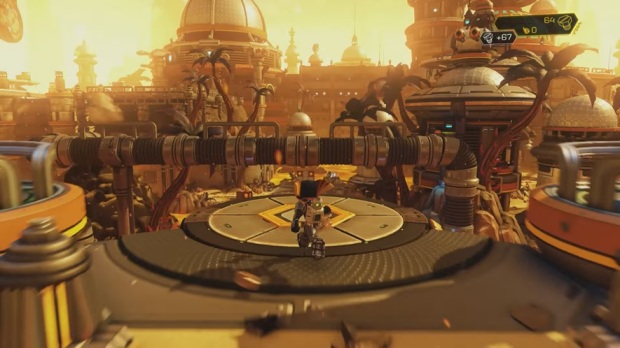 Environmentally and in motion, this game is gorgeous through and through.

Following the themes of the prior R&C games, the narrative continues to be very tongue-in-cheek silly. For a children’s game, it seems simultaneously aware of how silly it is and how hard it’s trying to pack jokes into its presentation. It gives off a distinctly intentional B-movie vibe, with Ratchet harping on NPCs as the judgmental jerk he appears to be, and Clank providing the flimsiest of robot personalities.

The Zapp Brannigan “narrator” in the story provides somewhat satisfying comic relief occasionally through his bravado and arrogance, buuuut the most the game got out of me was some extra forceful exhales from my nostrils. As I finish up the story, there aren’t really any moments that stood out as memorable.

Ratchet and Clank is actually fairly light on the platforming. In fact, it’s much more of a shooter/platformer than a platformer. You’ll find better platforming puzzles, reflex/time testing, or movement mechanics in a variety of games within the Sonic or Mario franchise, in games like Ori & The Blind Forest, and of course the pinnacle of this shooter/platformer hybrid style – Sunset Overdrive. 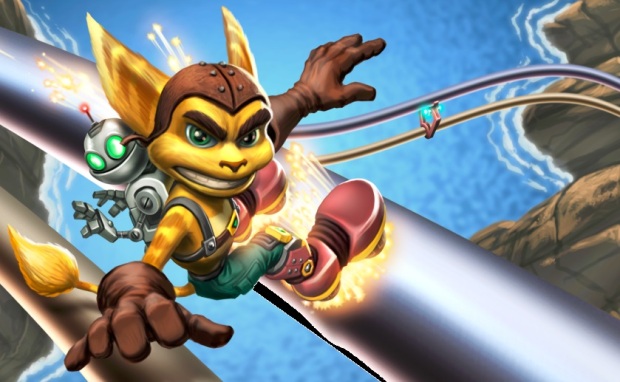 Grinding in Ratchet and Clank feels like a less challenging — though still fun — version of Sonic Adventure 2.

While Ratchet’s movement abilities start out somewhat clunky and hardly fluid, upgrades like the jet boost make movement progress towards a more fluid state. There are several jet pack missions that feel seriously fun and on point as you battle foes in high-verticality environments, but these are fairly sparse. The Clank-focused missions take on the puzzle-solving quota of the game, and are paired with slow movement, poor combat, and tiresome puzzles. These were easily the most unsavory parts of the game.

Surprisingly, mechanics that should be smooth and simple like weapon switching also lack nimbleness, with the weapon system placed upon a face button semi-radial menu. It functions more rigidly than expected and often required multiple attempts to quickly snag the weapon I wanted, but this is somewhat negated by the ability to map a hotkey’d weapon to the D-pad.

However, there are so many weapons that quickly run out of ammo that I found myself tolerating the larger weapons menu, which unfortunately had 2 pages to scroll to once I had more than 8 guns. Watch the first 30 seconds of this gameplay footage to see how frequent weapon switching is, and how much it pauses the game.

There is a sense of constant upward progress in the game that feels rewarding. You’re getting upgrades what feels like every 10 minutes if you’re doing an adequate job of switching weapons on enemies. I always appreciate when XP-gains are tied to usage of said weapon, so you level up the guns you naturally enjoy using first, and see them become better and better.

The amount of cogs and gears strewn about the mission and popping out of enemies is impressive to see, and even more satisfying as they flow into Ratchet himself. There’s something superficially satisfying about seeing thousands of little pieces stock your resources and currency, and then you’re easily able to spend those at the numerous shops on the islands.

Manually selected upgrade purchases of weapons seem to come quite frequently due to the rivers of currency one accumulates, and they function to make your weapons better and better throughout the campaign.

Most weapons feel relatively different mechanically, though they feel familiar in their use. You’ve got your immobilization weapon, a short ranged gun, a pea-shooter, a close-range flame thrower, a sniper, a rocket launcher, and quite a few others. Unlike Sunset Overdrive, one doesn’t get a chance to see the weapon in action before buying, so that’s a bit of a letdown. However, you end up with so much currency it hardly matters anyhow.

Positively, the gameplay has an adequate amount of challenge. The enemies are numerous enough and have enough variety of attacks that I had to switch weapons frequently to battle them, often evading their attacks, and occasionally looking intently for health. The open-worldness of the game is presented in the form of main vs. optional quests and traveling back to older planets to experience a bit of Metroidvania once you’ve grabbed the appropriate gadget. This, along with a variety of hidden golden screws might keep some players entertained, but didn’t do much for me. For completionist gamers, this likely will boost longevity.

Additionally, I must commend the variety of gameplay types available in the game. Ignoring the slow-paced and clunky Clank sections, the Ratchet sections most commonly feature decent gunplay… but they also include hover-boarding, airship combat, rail grinding, and the best part is likely the Jet pack sections. These 4 varieties are pretty fun on their own, but mostly add nice breaks from the core gameplay.

For a quick snippet of some various gameplay, this imgur album contains a nice snippet.

Finishing out the game, I really enjoyed some of the boss battles that come into play in the end. The final mission does a fantastic job of incorporating many of the gameplay elements from the whole campaign into one big finale. It’s lovely to see a fun platformer go for the gusto, both visually and mechanically, and I reckon it pays off pretty well in Ratchet and Clank.

Ratchet and Clank has some fun gameplay when the enemy hordes get dense, and the weapons are colorfully varied enough to make the core gameplay experience fun and exciting – especially as its encased in such beautiful visual splendor. Really, the game is cartoon gorgeousness. The silly story and clunky Clank missions act as a bit of a deterrent from the game, but there are some folks that may have fun with them. All in all, the high notes R&C hits as a self-referential, kooky-weapon platform shooter end up better represented in other titles, IMO. Once again, I’d recommend Sunset Overdrive for pretty much everyone instead (except maybe children)… since it’s also made by Insomniac games and feels like R&C for the adult crowd on amphetamines.

**Gameplay Design Worth Advocating For:**

**Recommended for fans of this genre?** Yes-ish. It’s a fun platform shooter for only 40 bucks, and it’s short and sweet enough that I’d say it’s worth playing for just a little bit at least. At least it’s worth a rental. Definitely worth checking out if one’s a franchise fan.

**Recommended for non-fans of this genre?** No. There are other games that I’d consider the pinnacle of this platform shooter genre, and if you haven’t noticed yet, my recommendation is Sunset Overdrive.

Discussion: This game review inspired a discussion on variety within games, and whether certain genres excel better than others are producing variety. To peep that discussion, check this out: https://www.reddit.com/r/truegaming/comments/569ddz/how_important_is_gameplay_variety_to_you_and_does/
e-vaughn

6 thoughts on “Ratchet and Clank: a light-hearted, polished lil platformer”