While my zest for animated comedy has waned over the years, I can’t deny that there’s been a resurgence in quality adult-oriented cartoons as of late. Cartoon Network’s Adult Swim has been a monumental force in bringing phenomenal content to television. If the amount of hype, memeification, and aggressive fandom that Rick and Morty has spawned is any indication of Adult Swim’s success, they seem to be doing quite well.

I, like a great many science-loving homies, have fallen in love with Rick and Morty during these last 2 gloriously violent, goofy, hilariously acted seasons. I found it compelling enough to write up an article about the normalization of stuttering and voice acting that the show contains, and I’m now very excited to say that I got a chance to play through the virtual reality experience made by Owlchemy Labs – the same folks that brought us Job Simulator.

If you’re a fan of the show, you deserve to experience this simulation, and if you’re at all interested in VR gaming, you should know that this is one of the more accessible and introductory experiences for any potential gamer.

Rick and Morty’s VR experience is easily one of the more accessible and engaging experiences, thanks to the quality humor and voice acting, the natural combination of hand-controls + room scale, and the minimal traversal/teleportation.

Introduction, Usability, and the First 13 Minutes of Gameplay:

So as I went through the two ish hour experience, I recorded my initial reaction and made commentary about the design, humor, and gameplay. I went ahead cut the first 13 minutes together. There are *no spoilers* in this video as it mostly demonstrates mechanics, throws some laughs, and showcases one of the mini-games.

For newer users to VR, this is a fairly accessible and usable experience. There isn’t any disconnect between bodily controls and the visor, there are minimal teleportation mechanics or abstract movements that disconnect virtual movement from physical presence, and honestly, the puzzles aren’t too challenging. Meanwhile, the humor is going to resonate with anyone that likes Rick and Morty, and it’s also going to likely appeal to anyone who likes somewhat jaded humor or is comfortable making fun of oneself. This is because the player steps into the role of a Morty clone, and it’s pretty much impossible for Rick to not make fun of Morty, so expect to get a smattering of relatively gentle verbal abuse during your playthrough. Mind you, narratively, it’s because Morty is a dumb dumb, and not you, the player, who is obviously a smart-as-fuck type of homie.

Real Rick and real Morty might make fun of you, clone Morty… but at least you can kinda slap around the VR real Rick and Morty in a VR real way. That makes sensible VR sense, right?

Bottom line is if you like Rick and Morty, you’re very likely going to enjoy this experience. The voice acting is spot on and done by the same folks from the show. The visuals are incredibly lush and Rick’s garage is recreated with incredible attention to detail. The scale of the game feels very appropriate as you exist in the space, and there is a really fine-tuned level of interactability with the many objects in the game. There’s even head collision!

Rick’s garage is packed with funky gadgets and goofy science that is fun to mess around with and explore, and I’m not big into exploration in games or in VR. In fact, I’d wager to say that I am NOT into exploration in games and I prefer more guidance and crafted experiences. I’ve played a number of exploration/puzzle-oriented VR titles at this time, and they are some of my least favorite types of VR experiences due to their lack of guidance and minimal gameplay elements.  As a result, the fact that the Rick and Morty Simulation was so enjoyable for me feels extra weighty.

Each object to explore is pretty much somehow tied or a reference to the show, and there are a variety of easter eggs hidden about. There’s also tapes to locate which contain little tidbits to listen to, and all of them are crafted with a solid acting performance.

The main storyline is one big joke that essentially acts only to progress the player’s existence through a series of challenges, and that feels very much in line with the nature of Rick and Morty. Don’t expect to see much progression of the characters, but note that there is one section where a character valiantly proclaims “That’s IT! This is canon! You hear me? This is canon now!” which definitely got a laugh out of me.

For the experience and being and Rick and Morty fan, there were a pretty sizable amount of chuckles throughout.

For the most part I was incredibly surprised by the amount of interactions the game had. From a delightful Mr. Meeks mirror-interactions to the diverse combinations of objects you can make from the combo-science machine, the game really rewards creative thinking.

The Combinator is a fun science contraption that builds out a variety of unique objects with funky little properties. Expect to use this bad boy for a variety of puzzles.

For those like me that sometimes get impatient with unclear guidance, a holographic wrist-watch helps provide guidance from a cute little Holo Rick. 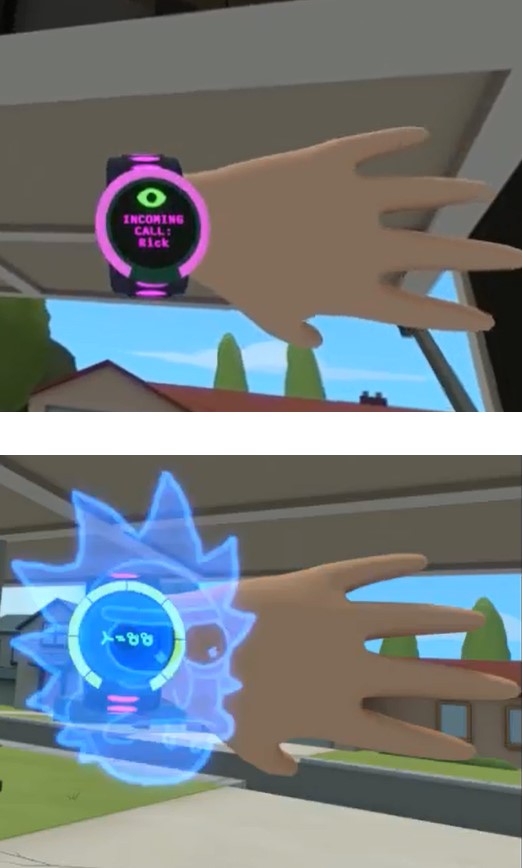 Guidance through a natural feeling wristwatch gives “handholding” a whole new meaning. That is to say, it’s really well done.

I felt especially good about the object interaction, and in the 13 minute play through video you can see that I played around with a variety of objects without any noticeable issues. I found the gravity of objects to be initially floaty before more accurately mirroring real world gravity, which I found helpful for allowing tosses and catches. This made object interaction feel easier than most other VR games, but I’ll caveat this and say I’m unsure if there’s a lot more programming that went into making object interaction feel so good. I also loved that there was head collision, even though it was nominal and not a gameplay element, but it did create a couple of fun moments and allowed hats/masks to be worn.

Gravity and objects have a real nice sense of weight. It’s easy to toss and catch all objects and they all have natural feeling collision. It feels like there is a lot of care taken with simply object interaction that makes it a joy to pick up each and every little thing.

Since I’ve played a variety of different VR titles at this point, I’d say that the Rick and Morty Simulation might have the best object interaction that I’ve played with yet. Things moved around intuitively, didn’t have collision issues, and were easy to grasp and move around. The battery charging mini-game had several movement inputs that could be messed up, yet it was surprisingly successful to move the dials and knobs in exactly the way I would in real life. I consider that a huge success.

VR is leveraged well in the bop-it style battery charging game that has the player pushing nobs and twisting dials. While initially challenging, it quickly becomes easy to use even at high speeds.

And as there are fairly minimal gameplay elements, the humor and references are where this experience thrives. Noting that the experience is 120 minutes and 30 bones, it’s important to identify that there isn’t much as far as replayability. Besides easter egg exploration, a rather simplified shooting gallery to increase your high score, and of course achievement hunting, there isn’t much to keep you coming back. Even though I don’t care for exploration, the 30 bucks for 2 hours was WELL worth it for this homie. The novelty of VR, the fun object interaction, and the variety of laughs makes me want to own this even just to share with friends new to VR.

The Rick and Morty Simulation is a pretty amazing little experience. It’s thoroughly funny, has excellent voice acting, uses narrative to explain away silly VR/game limitations, and heartily pokes fun of the user while making him/her feel engaged in the experience. It’s fun, easy to pick up, doesn’t cause any motion/nausea issues due to its intelligent design, has a couple fun mini-games, and I’d say it’s worth picking up for the 30 buck cost.

By the end of the 2-hour journey with these nutbags, the player has gotten a taste of a day in the life of a Morty. I’d say this is a worthwhile day to experience – especially if you then share it with some new-to-VR type of homies.

We’re in a new world of VR rating scales, and it’s very challenging to consider how to rate a 2 hour title that is more of an experience rather than a game. I’ve tackled experiences like Firewatch and Superhot and those are often rated based on what they are trying to accomplish, and it really feels like this Rick and Morty VR title accomplished everything it sets out to do, namely: make the user laugh while giving them fun objects to poke around with for about 2 hours. In comparison to the 30+ VR titles I’ve played by now, I’d say this is one of the best VR exploration titles out right now that isn’t cemented in pure gameplay, and it’s easily the best narrative experience. To make it better would be to make it have more longevity, or replay value. That is to say, it’s good and I want more of this good thing.

Gameplay Design Worth Advocating For:

**Recommended for fans of this genre?** Yes! This is one of the best narrative-based VR titles that focuses entirely on exploration. If you like Rick and Morty orVR, you best be trying this shit out, homie.

**Recommended for non-fans of this genre?** Yes! As a gamer who really doesn’t like exploration based challenges, the exploration in this game hit home for me. As a gamer who is tepid on puzzle games, this also hit home for me and was really fun. If you don’t like humor or don’t like laughing or simply think the style of Rick and Morty is abrasive… well, then maybe it’s not for you.

**Recommended for non-gamers?** Yes! While VR is new and not for everyone, this is one of the more noob-friendly and easy to enjoy experiences! The movement mechanics are easy to pick up, likely won’t cause any nausea or issues. On top of that, gameplay mechanics are explained within the narrative, they’re hilarious, easy, and the  puzzles are not all that challenging.

**Recommended for Non-Fans of Rick and Morty:** Yes. I’d ask non-fans to consider their preferred type of humor. If you’ve got any interest in science-oriented, semi-offensive crassness in your comedy with some unusual voice-line delivery, you’re in for a treat. If you’re a little more serious in the types of comedy you prefer, well then I’d advocate that the VR mechanics in this title are enough to at least give it a shot. If you’re easily offended or aren’t down with virtual avatars poking fun of you because you’re a silly little clone, then it’s possible you might find this experience abrasive.

For comparison, the Rick and Morty creators did a previous VR title called Accounting which was effectively a precursor to this Rick and Morty Virtual Rick-ality because it used similar humor and the same voice actors. I found this experience to be relatively enjoyable, but would not recommend it to most folks due to how abrasive the repetition of lines and vitriol spewed from some of the characters tended to be. The Rick and Morty VR game is a much more gradual entry into the stylistic humor of justin Roiland (the creator and voice actor of Rick and Morty).

← Virtual Reality & THE THRILL OF THE FIGHT – Fitness, Boxing, and Soreness with the HTC Vive
A Review of Modern Romance →