The Action Landscape in 2017

It’s a great time to be an action movie cinaphile. While the 90s and early 2000s held their respective heads above water, the recent years’ entries have provided some interesting blends of incredibly well-choreographed action, solid editing, and stylistic cinematography. Moving away from the horrific shaky-cam, hyper-editing, sloppy action of the Bourne movies or Bond entries like Quantum of Solace, we find ourselves in a landscape with fresh action-flicks like The Raid 1 & 2, John Wick, and now Atomic Blonde.

Unlike those other flicks which have a cemented identify in their action core, Atomic Blonde tries to be a bit more than a wonderfully well-crafted dynamo. Unfortunately, that ambition reveals several missteps that must be highlighted along with its successes. 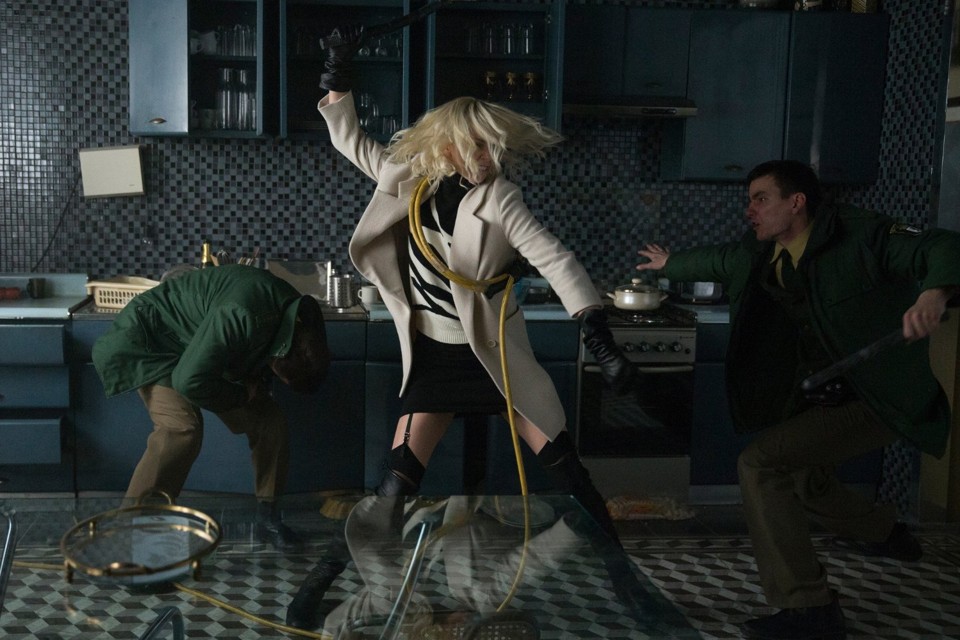 Atomic Blonde has much to be praised. I’ll get to the most exceptional component of its action in a little bit.

It’s got a stylistic tone and aesthetic that is reminiscent of its comic-book adaption roots. I love the soundtrack and 80’s vibe peppering the flick, while still maintaining a contemporary visual feel and cadence. The editing is fun and experimental early in the movie, but the latter half is strangely missing any editing gimmickery or flare.

The fashion is exceptional. Both Theron’s character and Macavoy’s are dripping with style and intentional clothing choices. There is a sexiness to the film and the color contrast is sharp throughout, without ever feeling too glossy or oversaturated. The movie is mostly cool hues that exaggerates the neon whenever it appears.

And of course… the reason you likely watched the movie is the fighting and action. This is far from the first badass female protagonist we’ve seen leveraging physical combat to overcome her obstacles, but it might legitimately be the most well-constructed underdog fight scenes of any film in recent memory. The physicality of Theron’s performance, the style of martial arts she uses, the amount of brutal punishment she endures, the choice to contain abundant long takes and intimate hand-held camera footage… all of these make the action incredibly striking. Dripping with oomph, even.

There are several note-worthy scenes to this flick. The hallway long-fight is exceptional. It’s an insanely long take (very likely interspersed with clever cuts when the camera hits flush against someone’s clothing or a wall, close-up) yet it moves dynamically and brutally. I can’t deny that I was in a state of awe for most of the fight scenes. Like John Wick’s palpable love of murdering goons, Theron’s character clearly enjoyed the physical struggle, which made me enjoy her struggle.

First and foremost, this movie is almost immediately comparable to John Wick in its style of action and combat (yet it very handily relies more on hand-to-hand combat, rather than gunplay). However, it isn’t a revenge thriller. It’s a spy flick. A spy flick that has a relatively weak plot, designed only to propel the story forward in search of a singular confidential “list” in the bowels of Berlin.

This plotting forces comparisons to much stronger spy-flicks like Mission Impossible, or character driven capers like the Bond franchise flicks. Unfortunately, the star player that is Theron’s character does not have the gravitas to hold down a spy-thriller. Her coldness makes her feel more like a Glacial Blonde rather than an Atomic one. I don’t recall a single moment where she is charming in her personality. There is never a moment where she actually uses disguises or persuasion, mental trickery, or anything that would normally be contained in an espionage picture. In fact, she’s so glamorous and beautiful that she sticks out like a sore thumb.

While the intentional physical struggles were a sight to see, there were several components to this movie that prevent it from being a dazzling knockout.

For a movie that should and will very likely aim for a franchise streak, we’ll need to see more dynamic expression from our Atomic Blonde in order to preserve any notion of credibility that she’s actually good at being a spy… and not just a blood-thirsty combatant. Oddly enough, James Macavoy’s character lays on the eccentricity and spy-skills throughout, so the movie does have a notion that these elements are somewhat important.

It’s a bit funny that the most realistic parts of the film are the physics-based fight scenes, yet the CIA sections and spy-bits feel untethered and in need of backstory, which I hope to see developed in future films.

All in all, Atomic Blonde is a pretty enjoyable movie for anyone hungry for an excellent action film. For fans of well-crafted choregraphy and stunning camera work, definitely peep this bad boi. For fans of style of substance and bountiful eye candy, this one’s for you. For folks that don’t much care for the driving force of plot in their actioners, this’ll definitely be an easy one to give grace to. Here’s hoping that any future sequel or prequel or whatever film that stars Theron’s character once more has her demonstrating a bit more of her psychological competence. Keep the kicks and random-object fight scenes coming, and I’ll still be snagging a ticket to see if the next Blonde picture goes as nuclear as this one.

Recommended for fans of this genre? Yes! Most definitely, this is a strong entry in action. Did you read my praise for how well-constructed the action is? It’s the best part! Go peep this homie. It’s definitely got comparisons to John Wick in many ways.

Recommended for non-fans of this genre? Maybe. There is enough of a crispy cool package here that is diverse and beautiful that many can enjoy it, even if they’re not action fans. However, the action is easily the greatest part and the strongest contributor, so if you’re averse to action, give this a pass.